Finally, A Glimmer of Hope for the Future of 1031 Exchanges

As you are aware, the 1031 exchange has become a political football ever since the Biden administration proposed limitations on this tax break as a way of helping pay for the programs in several of their proposed spending bills.

Recently, the Senate passed a $1 trillion bipartisan infrastructure bill as part of President Joe Biden’s larger economic agenda, which includes a $3.5 trillion bill that the chamber may move to pass through a process called reconciliation.

The Devil is in the Details

And while the details of these pieces of legislation will be hammered out in committee, the 1031 exchange got its first piece of good news as the Senate voted on a dizzying number of amendments attached to the infrastructure bill.

One of those amendments, offered by Sen. John Kennedy (R-La.), would prohibit any changes to the treatment of like-kind exchanges in the U.S. tax code.

And while amendment votes are generally considered not-binding, they do carry weight as an indication of Senators’ preferences when the final legislation is being drafted. Even more encouraging, the vote passed unanimously. In Senator Kennedy’s words,

“Like-kind exchanges directly benefit Middle America by creating jobs and affordable housing. Congress should pursue economic policies that multiply opportunity and productivity, and I’m glad the Senate voted for an amendment that will support middle- and working-class Americans,” said Kennedy.

As mentioned, the ultimate fate of the 1031 exchange has yet to be determined, and we encourage you to express your support to your elected representatives, which you can do here.

At Fortitude Investment Group, we are committed to doing everything possible to preserve the 1031 exchange. We will keep you informed as we hear any new information.

Please schedule a time to talk to us if you have any questions on this topic.

Have you checked out our latest ebook?

This is for informational purposes only and is not an offer to buy/sell an investment. There are risks associated with investing in Delaware Statutory Trust (DST) and real estate investment properties including, but not limited to, loss of entire principal, declining market value, tenant vacancies and illiquidity. Diversification does not guarantee profits or guarantee protection against losses. Potential cash flows/returns/appreciation are not guaranteed and could be lower than anticipated. Because investors situations and objectives vary this information is not intended to indicate suitability for any particular investor. This information is not meant to be interpreted as tax or legal advice. Please speak with your legal and tax advisors for guidance regarding your particular situation. 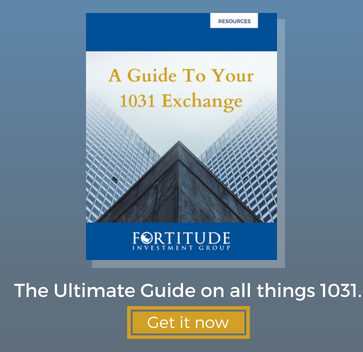 Let Us Know What You Thought about this Post.

Have you lost a real estate property? Tax relief may be at hand.

Reinvesting in a DST After Your DST Liquidates

This is for informational purposes only and is not an offer to buy/sell an investment. Pictures used are for illustration purposes only and are not current offerings. Future offerings will vary and may change at any time. The companies depicted in the photographs and listed herein may have proprietary interests in their names and trademarks. Nothing herein shall be considered an endorsement, recommendation, or offer to purchase by Fortitude Investment Group, CIS, CAM and CIA, or the investment vehicles they may offer of such depicted companies. Further, none of the companies are affiliated with Fortitude Investment Group, CIS, CAM and CIA in any manner. Concorde Investment Services, LLC 19500 Victor Parkway, Suite 550, Livonia, MI 48152.